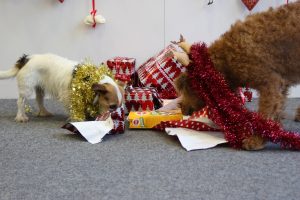 Daisy – Hi Spud. Do you know what time of year it is?

Spud – Well I know that it is getting colder and the days are shorter, if that is what you mean.

Daisy – Yes, and that means that it is nearly Christmas time! Yippee!!! Have you seen all the decorations in the office? They look so pretty and festive. I love Christmas! It is so much fun with all those presents. I especially like the stockings, all those bits of wrapping paper and ribbon – the whole floor is covered in them.

Spud – Oooo Daisy, it is exciting. I love Christmas too! If I am lucky I get a bit of the turkey and I especially like the cheese.

Daisy – Where will you be spending Christmas this year Spud?

Spud – We are going to see some of Square’s family and I will have to be on best behaviour.

Spud – Well we were there last year and they have lots of animals (as well as loads of dogs), and I might have been caught with one of the precious (and very tasty) bantams in my mouth……

Daisy – Oh Spud, that is REALLY naughty! Almost as naughty as my daughter who was found in the game keepers car with a dead pheasant at her feet.

Spud – Oh no Daisy I didn’t kill the bantam. It got rescued. I think if I had killed it I might not have been invited again.

Daisy – Well that is something at least. So what other dogs do they have?

Spud – They have two Jack Russells, like you Daisy, a mother, ‘Piglet’ and her son, ‘Dexter’ and then there is a scruffy little black number called ‘Matilda’ who apparently is frightfully smart but looks can be deceptive! She is an Affenpinscher and excitingly they have a fourth dog who is still a puppy so there will be lots of games to be had! How about you Daisy, where are you spending Christmas?

Daisy – I am going to see my daughter. She is called Poppy and is two years old now and is very naughty. Always trying to escape, she loves chasing pretty much everything but she and I do have my very best

Spud – What is that?

Daisy – Grandpa gives us a cheap inflatable football. The sort of thing you can buy in a garage and might take to the beach and we chase it round and round the garden, so fast. It really is the best game ever but sadly the ball doesn’t last very long. If we get it trapped, we bite it and kill it and then the game has to end. A new ball is one of the presents I have put on my Christmas present list, so that we can have a game. Have you asked for any presents Spud?