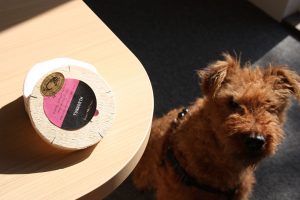 Daisy is away on holiday so as they say ‘while Daisy is away Spud will play’ and I have got the whole blog all to myself – Yippee!

As you will probably know from the ‘meet the team’ page on our website my favourite thing is CHEESE! I can’t get enough of it, soft or hard, I’m not fussy. I might be a little less excited about blue cheeses but I wouldn’t turn it down. It is the smell you see. As you probably know us dogs have a much stronger sense of smell than you humans. That is because you humans have about 5 million scent receptors in your noses which might sound like quite a lot but when you compare that to a bloodhound which has nearly 300 million and even us terriers have about 150 million you can see that you are left way behind.

Those cheeses that you think are a bit powerful and stinky, just imagine how they seem to us dogs?

I can sniff out a yummy cheese from miles away and a good local cheese is always worth sniffing out especially an award winning one. One of my favourites is Tunworth which is made in Hampshire only a few miles from two of the properties that Wilson Hill are selling in Shalden and Crondall.

Crondall is such a vibrant little village with three pubs a Post Office, a village school and a Doctor’s surgery. There is, of course, a village fete in the summer with a BBQ, beer tent, ice creams and lots more. Then there is the Crondall Triathlon where competitors swim for 400 meters, cycle for 20 km and then run for 5 km this is a very popular event in the community.

Also there is a Petanque club with around 100 members meeting on Thursday evenings. There is a Scout group as well as Brownies and even a lady who offers a dog walking service if you are out all day. She even has a special service for people moving house whereby she will collect us dogs from the old house and deliver us to the new house to keep us out of the way of the removal men and all those packing cases!

Saxons called the village Crundellan which refers to local Celtic chalk workings. There are many natural springs in the area which were used as watercress beds in the past and the area also grew tobacco at one time. Today one of the local farms produces rape seed oil which is high in vitamin E, a natural source of Omega 3 and less than half the saturated fat of olive oil!