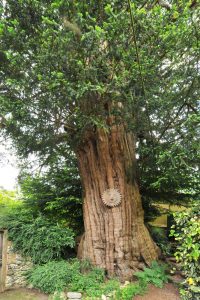 Spud – Hi Daisy, what do you know about yew trees?

Daisy – You trees? or Ewe trees?

Daisy – Well, quite a lot of them grow on The South Downs and they are dark green and often there are deer hiding in the woods which are great fun to chase.

Spud – Yes, Daisy, that is all very well but did you know that most parts of this evergreen tree are poisonous and the leaves are the most poisonous part. In fact the Latin name of the yew tree is Taxus baccata and in many European languages this tree’s name is derived from this Latin term which is from the same root as toxic, so don’t you go eating any part of it.

Daisy – don’t worry Spud I will steer well clear. Like you, I prefer cheese!

Spud – OOH Daisy don’t take me off topic, you know how easily I can be diverted by the very mention of cheese!

So back to the yew trees…….they are one of the longest living plants in Europe with some specimens living for thousands of years. Just imagine that. It is impossible to determine their age accurately as they often become hollow  in the centre which is fun for the kids to hide in (if a bit full of cobwebs and spiders) but it means there are no rings to count so you can’t tell its age.

Daisy – what? You can tell how old a tree is by counting the rings?

Spud – yes, if you cut down a tree you can count each year of growth which shows as a ring in the trunk.

Daisy – but if you cut it down it will be dead!

Spud – yes that is a bit of an issue.

Spud – Have you seen the properties that Wilson Hill are currently marketing with really ancient yews in their gardens? There is

Robins Bottom Cottage, a delightful cottage which was originally the home of a forester and it has a wonderful, large old yew tree in the garden and then there is Badgers, once called Yew Tree Cottage. Whilst it was called Yew Tree Cottage it was owned by the American art collector Peggy Guggenheim and she wrote about the house, garden and the yew tree in her book ‘Out of this Century’. Apparently she had the top of the tree removed as it was a fire hazard and although this seems like an almost criminal act, it may well have saved the life of the tree in the long run as when the great storm of 1987 struck the south of England this majestic yew was mercifully unaffected unlike many others. This may have been partially due to the reduced weight of the canopy.

We believe that this may well be the largest garden yew tree in Sussex. It is likely to be 1000 years old or more and could have been planted as a border marker given its proximity to the Hampshire/West Sussex border.

Spud – It really is – one of the reasons these trees can live for so long is that they can grow new shoots if they get cut or damaged. The yew is often associated with churchyards and one of the theories for why this might be is associated with its long life, people thought it was suggestive of eternity or the alternative view is that being poisonous they were seen as trees of death. A third explanation and a more practical one, is that they were planted to deter farmers and drovers from allowing their animals to graze around graves. Also conifers were sometimes seen as sacred because they never lost their green.

Daisy – Do you have any more interesting knowledge about yews Spud?

Spud – loads Daisy – It can be used as a medicine, one of the ingredients in a cancer treatment can be synthesized from the extracts of the leaves of the yew, which is quite surprising given that it is all poisonous.

And yew is among the hardest of the soft woods and is easy to work although it is often has knots and can be twisted so there can be a lot of waste. Yew wood is particularly good for making longbows and both the heartwood and sapwood are used as the sapwood resists stretching and the heartwood resists compression so together they increase the strength and efficiency of the bow.

As demand was so high there was a shortage of yew, people were allowed to make practice bows out of alternative woods such as ash and hazel. Also yew was a prized wood for lute construction. Today the yew is widely used in landscaping for hedges and in topiary as you can see from this photograph of The Petersfield Physic Garden.

Daisy – Well that is very interesting Spud and if you wanted to see lots of examples of these, there is a wonderful yew woodland, in fact the largest yew woodland in Europe in West Sussex at the Kingley Vale National Nature Reserve. It is great fun and there are some excellent views you can enjoy, well I can’t really because my legs are too short but from the top of the Downs you can see Chichester Harbour and all the way to the Isle of Wight.