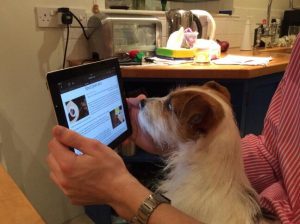 Daisy – Have you heard Square and Harriet talking about social media?

Spud – Yes, I did hear that but what is it? What does it mean? I thought social was being friendly to people (or dogs) but the media bit has flummoxed me. Isn’t that to do with that square box in the corner of the sitting room with moving pictures?

Daisy – you mean the television. Yes I think that is one type of media but I think when they talk about social media they are referring to something called Twitter and Facebook.

Spud – well twitter is easy – that’s what the birds do all the time!

Daisy – No Spud, it’s a different sort of twitter. It is on the computer or it can be on a mobile phone.

Daisy – well that is also on the computer and has nothing to do with either your face or books. Basically both Twitter and Facebook are ways for people to share their thoughts, photographs and ideas with thousands of people all around the world.

Spud – Look Daisy, there are photos of us! There is one of me at the beach and another one of when we went to check out that house, and do you remembered when we interviewed Russell that was interesting…….ooh I like that one of you and me on pancake day – that was a fun day – we should do that again!

Daisy – I think that only happens once a year sadly. But look at all those other photos of the area, the houses for sale, the wildlife…….it seems to be quite fun this social media stuff and we are meeting new doggy friends, do you know there are lots of other working dogs out there.  Some of them are based in an office like us and others do amazing work looking after people who need their help. Dogs like Guardian angel Hetty who is the 1st dog in UK trained as Guide & Seizure Alert dog, and then there are Dogs for the Disabled and Canine Partners and lots more.

Spud – I thought we were the ‘canine partners’?

Daisy – Yes Spud, we are at Wilson Hill but out there in the big wide world there is a wonderful charity who train dogs to help people with disabilities. The dogs are really clever, they do all sorts of things for their owners including emptying the washing machine – have you ever done that Spud?

Spud – No Daisy – I am so busy writing this blog with you and keeping the office running that I hardly get a chance to do the housework at home!